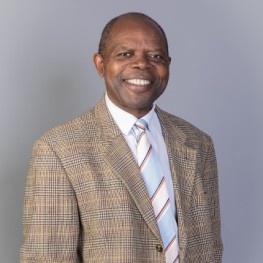 Prof  Emmanuel Ngwainmbi  described as a High Level Communication Specialist, has served as a full tenured professor in several universities in the US. Ngwainmbi holds the Ph.D. in Human Communication Studies from Howard University (1991),  He has lectured in Asia, Europe, US, Middle East, and Africa about globalization and the socioeconomic impact of information technology on indigenous cultures. Currently, he serves as a part-time faculty member in the Department of Communication Studies at the University of North Carolina, Charlotte, and trains the US Navy on foreign cultures. He also provides technical assistance to the Corporate Communications office at the Bank of America, and has been invited to present papers in more than 150 conferences around the world.

Professor Ngwainmbi has held senior managements positions in a number of regional, national, and international organizations, among them director of international education programs and communications adviser.

Prof. Ngwainmbi has advised various United Nations agencies and other intergovernmental bodies on social change and development communication. He is on the Editorial Boards of 13 professional national, regional, and international organizations in mass media and communication, including the Athens Journal of Mass Media and Communication. He has authored fifteen books and articles in journals and magazines, including Volume Editor of Healthcare Management: Communication and Development in Development Countries (Lexington Books), Democracies, Diplomacy and Media Engagement among Emerging Economies (Palgrave MacMillan), and is series editor of Global Media Reporting and Cultural Dissonance (forthcoming). Emmanuel has been invited to contribute to “a landmark, 5-volume book, The SAGE International Encyclopedia of Mass Media and Society”.

With more than 35 years’ experience in research and publishing, his writings are published in the Netherlands, Germany, US, Africa, and India by the IOS Press, Tilburg; Roman & Littlefield, the Washington Review; Palgrave MacMillan, Lynne Reiner, Routledge, Sage, Greenwood Press, Writers Workshop Calcutta, university presses. Some of his writings have been translated into Mandarin, French, Spanish, Afrikaans, and German.

He has taught at George Washington University, and other institutions of higher education. Prior to joining the United Nations as communication and advocacy consultant, he was Director of International Programs and Head of the Department of Language, Literature & Communication at Elizabeth City State University (NC) and Jackson State University (MS).

Academic credits include Departmental Teacher of the Year and Distinguished Professorial Award. He is listed among Who’s Who among America’s Teachers ©. He is listed on the Roster of Communication Experts with the United Nations Economic Commission for Africa, UNESCO, UNFPA, African Development Bank, Roster of Development Experts and other Rosters of Communication Consultants sponsored by United Nations agencies.

He has received numerous awards for his contributions to academic platforms such as the International Conference on Social Sciences, Vienna and the International and the Leadership Development Institute. He is the 2000 recipient of the Professorial Award from the Chinese Academy