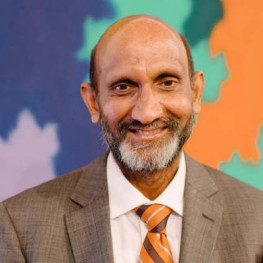 A great listener, Prof. Jagadish is a Distinguished Professor and Head of Semiconductor Optoelectronics and Nanotechnology Group in the Research School of Physics and Engineering, Australian National University. He has received Australia’s highest civilian honor, AC, Companion of the Order of Australia, as part of 2016 Australia day honors from the Office of the Governor General “for eminent service to physics and engineering, in particular nanotechnology, to education as a leading academic, researcher, author and mentor, and through executive roles with national and international scientific advisory institutions”. He has served as Vice-President and Secretary Physical Sciences of the Australian Academy of Science during 2012-2016. He is currently serving as President of Australian Materials Research Society and President Elect of IEEE Photonics Society.  Prof. Jagadish is an Editor/Associate editor of 6 Journals, 3 book series and serves on editorial boards of 19 other journals.  He has published more than 860 research papers (580 journal papers), holds 5 US patents, co-authored a book, co-edited 10 books and edited 12 conference proceedings and 15 special issues of Journals. He won the 2000 IEEE Millennium Medal and received Distinguished Lecturer awards from IEEE NTC, IEEE LEOS and IEEE EDS. He is a Fellow of the Australian Academy of Science, Australian Academy of Technological Sciences and Engineering, The World Academy of Sciences, US National Academy of Inventors, IEEE, APS, MRS, OSA, AVS, ECS, SPIE, AAAS, FEMA, APAM, IoP (UK), IET (UK), IoN (UK), AIP, Honorary Fellow of Indian Academy of Sciences and Honorary Member of Materials Research  Society of India. He received Peter Baume Award from the ANU in 2006, the Quantum Device Award from ISCS in 2010, IEEE Photonics Society Distinguished Service Award in 2010, IEEE Nanotechnology Council Distinguished Service Award in 2011 and Electronics and Photonics Division Award of the Electrochemical Society in 2012, 2013 Walter Boas Medal, 2015 IEEE Pioneer Award in Nanotechnology, 2015 IEEE Photonics Society Engineering Achievement Award, 2016 MRSI Silver Jubilee Anniversary Medal, 2016 Distinguished Fellow of Chinese Academy of Sciences, 2016 OSA Nick Holonyak Award and 2016 STAMI award.

Prof Jagadish strongly believes that human thinking should be above technology and this can happen only if we listen effectively. Change happens by listening and therefore listening matters. Prof Jagadish believes that one significant reason for his success in academic science – aside of his very hard work – is that he has developed effective listening skills. He likes the famous quote from Ralph Nichols: “The most basic of all human needs is the need to understand and be understood. The best way to understand people is to listen to them.”