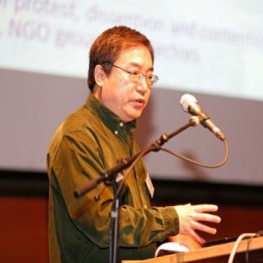 Zixue Tai Ph. D. is a famous internationally renowned academician . Dr Tai is currently an associate professor in the School of Journalism & Telecommunications at the University of Kentucky. Born and raised in China, he has an Associate Degree in general education and an MA degree in international journalism from two Chinese universities. He was an educator and a researcher at Shanghai International Studies University prior to pursuing graduate studies in the United States. He has an MSS (Master of Software Systems) degree from the University of St. Thomas (Minnesota) and a Ph.D. in mass communication from the University of Minnesota. His primary area of research pertains to the various aspects of the social, political, and cultural ramifications of the blossoming new media sector, as well as social media activism and collective action in China.

Dr. Tai is the author of The Internet in China: Cyberspace and Civil Society (Routledge, hardcover released in 2006 & paperback published in 2012), a pioneer scholarly work examining the social impact of the Internet in China. He has also published extensively in premier journal outlets such as the Journal of Communication, Journalism & Mass Communication Quarterly, New Media & Society, Psychology & Marketing, Sociology of Health & Illness, and Tobacco Control, among others. Additionally, he has contributed numerous chapters to edited volumes focusing on various aspects of new media and Chinese society. He is currently completing a book-length projects interrogating the widespread practice of gold farming in China.