“If They Would Only Listen”: Racism as Exemplified in Policing 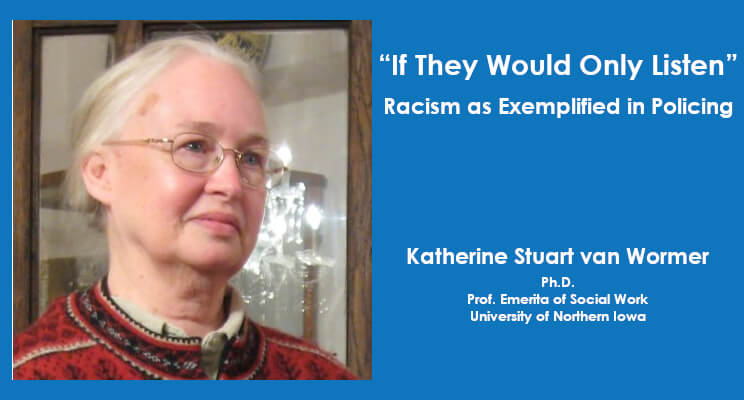 “If They Would Only Listen”: Racism as Exemplified in Policing

What are the qualities of listening that are relevant to the discussion of racism? And what is the legacy of racism in American society? This paper explores these issues based on principles from social psychology to explain how racist biases impede empathy and understanding. The starting points are an overview of listening in the context of empathy and a discussion of the impact of discrimination on African Americans in health care as well as in the criminal justice system. The savage killing of the crime suspect, George Floyd is described as the epitome of racism and because the police consistently have inflicted violence on the most vulnerable people in society This article concludes with a statement concerning how racism can be curbed through empathic listening.

The Quality of Listening

As discussed by Ray Donahue (2020) on the Global Listening Centre website, the terms of hear and listen are used in juxtaposition. Listening, in this context, is mindful and more of an art as compared to the mere biological response associated with hearing. As a case in point, Pope Francis (2016) provides the following definition:

Listening is much more than simply hearing. Hearing is about receiving information, while listening is about communication, and calls for closeness. Listening …. means being able to share questions and doubts, to journey side by side, to banish all claims to absolute power and to put our abilities and gifts at the service of the common good (7th paragraph).

And yet, as Donahue indicates, these terms do not always follow so neatly this distinction in usage. Often, the word hear is used in the sense of listening attentively, as for example, in the statement, “I hear what you are saying.”

An essential ingredient of close listening is empathy. Empathy involves putting yourself in the place of the other. Global listening, as defined on the GLC website, adds the dimension of intercultural understanding and trust to the formulation. Such close listening is never easy,” as Pope Francis explains:

Many times, it is easier to play deaf. Listening means paying attention, wanting to understand, to value, to respect and to ponder what the other person says (8th paragraph).

The opposite of listening is tuning out. People who have a racial bias are adept at tuning out or playing deaf to the humanity of the other. A prime example of the disregard for the human life of a Black person famously took place in the horrendous chokehold killing of George Floyd by a white police officer as other officers looked on. “I can’t breathe” the handcuffed man repeatedly cried out. The police had to hear the cries, yet they failed to respond. The police officers completely tuned out to the pleas of the victim. Similarly, they disregarded shouts by bystanders who begged the senior officer to remove his knee from the man’s throat. The end result is that one man is dead, four police officers were charged with murder, and mass protests broke out first in Minneapolis, then across the U.S. and parts of the world. The dispassionate cruelty revealed in this incident marks a turning point in racial history and is now considered only the most blatant example of institutional racism in U.S. society.

Discrimination against Black people in America is revealed in data that show racial disparities in infant and maternal mortality, housing, life expectancy, employment, and disease. These long-standing inequities have placed African and Hispanic Americans at higher risk of dying from the coronavirus pandemic. And according to a recent United Nations report, indigenous and other minority populations throughout the world face the same risks in the current public health crisis related to class, caste, and racial discrimination.

Not only is racism most apparent in health care and economics, but it is also pervasive in the criminal justice system. In the country with the highest incarceration rate in the world, African Americans are incarcerated at more than 5 times the rate of Whites. And in a country where around 1,000 people are killed by police each year, Black rates two-and-a-half to three times as high as White rates. Within this context of racism, such acts as took place in Minneapolis can be considered part of the pattern.

The Psychology of Racism

People who discriminate on the basis of race or some other demographic category, generally do not see themselves as racists. Research from social psychology shows how people can turn away from the suffering of others in the midst of social inequities. We all have our defense mechanisms. Cognitive dissonance is the term used by psychologists to explain how people justify unfair treatment of others. As defined by social psychologists Tavris and Aronson (2020), cognitive dissonance is “a state of tension that occurs whenever a person holds two cognitions (ideas, attitudes, beliefs, opinions) that are psychologically inconsistent with each other” (pp. 17-18).  The tension produces a state of discomfort that the person will feel compelled to reduce. Because people generally want to believe they are good, moral beings, and that they treat each other well, an important element of their self-concept is threatened when they are confronted with facts that would seem to indicate the opposite. Many people also want to believe that if they see an instance of deliberate cruelty or injustice that they would take a stand against it.

From the literature on prejudice, I have filtered out the following factors that have special relevance to our interest in listening. One might say that these are all behaviors (psychological mechanisms) that relate to tuning out to the needs of others, or, in other words, “turning a deaf ear”.

Self-Justification of Unfair Treatment of a Minority Group

Self-justification is a defense mechanism that arises as people rationalize their prejudices as deserved and their behavior as appropriate given the circumstances. For example, older White women who had grown up in the Deep South under conditions of segregation, experienced a disturbing contradiction between American democratic ideals shared with the larger society and the harsh reality of race relations under the Jim Crow laws and customs. To reconcile the dissonance between values and the reality of injustice, Whites often argued that Blacks and Whites were “separate but equal” and that the races were happier that way (see van Wormer et al., 2012). Victim blaming is a related defense strategy that shields the privileged individual from any sense of responsibility for another’s pain and/or oppression.

Such self-justification, according to Tavris and Aronson, can increase prejudice, distort history, perpetuate injustice, and warp relationships. But if people can understand this tendency to rationalize bad behavior, this can be the first step toward finding solutions that will defeat the rigidity in thinking.

Tribal affiliation refers to identification with one’s reference group, as for example, with one’s race or social class. There is nothing inherently wrong in taking pride through membership in an exclusive group, such as a professional organization, and group solidarity is reinforced by competition or threats from the outside. The outside forces may be seen as enemies, however, and dehumanized. This is especially true in the life and death situations of wartime. Now think of policing. The sense of brotherhood against people who commit crime, and might be armed and dangerous, is a powerful reinforcement of group solidarity. The fight against crime can then become a fight against crime suspects. Racial and ethnic differences can exacerbate the situation, which can escalate into violence. Police culture, as it has evolved in the United States, is notorious in this regard, traditionally exclusive of outsiders and racist and sexist (Balko, 2013). The tribal affiliation in policing serves to justify mistreatment of others, enforce a code of silence, and is strengthened through dehumanization and stereotyping.

Tavris and Aronson define stereotyping as a convenient way of categorizing people based on expectations of their characteristics. All members of a given group are lumped together into one category. Racism and stereotyping go hand in hand.

Attending only to information consistent with one’s preconceived notions

Related to stereotyping is a disregarding of evidence that members of the minority group have positive attributes or that they are victims of circumstance beyond their control. Because of the wide variety in available media sources for information, TV viewers and Internet readers typically choose to be exposed to material that coincides with their own political views and biases.

Overreacting Due to Military Training

One additional aspect of racism that is unique to policing is the militarization of the profession. Law enforcement officers typically are armed with weapons such as those used in warfare. The military, in fact, passes down unused military weapons and vehicles to police departments. Another aspect of militarism in policing is the preference in hiring for persons who have served in the military. The way racism fits into the picture is that people trained for combat to defeat the enemy are likely to see law violators, especially those of a different race, in enemy terms. It becomes a situation of us versus them. Combat veterans suffering from post-traumatic stress disorder have been known to overreact in situations of conflict and engage in excessive violence. Interestingly, the officer who tortured and killed George Floyd had been recruited from the military. Although there is no indication his violence was triggered by a flashback to combat, his military training undoubtedly played into his brutal behavior. (For a study on militarization of policing, see Balko, 2013).

Note that each of the delineated factors that serves to promote racism—self-justification of unfair treatment of a minority group, tribal affiliation, attending only to information consistent with one’s preconceived notions, stereotyping, and overreacting due to past trauma—is a behavior that deters both listening and empathy. These defenses and reactions, however, can be broken down through the kind of understanding and empathy that listening entails.

Although empathy through listening does not automatically bring about fair and humane treatment of the other in a conflict situation it is a key ingredient in effective communication. For this reason, the mental health professions teach skills of empathy to help practitioners work with potentially hostile or psychologically disturbed clients. Such training would be helpful to police officers as well.

The focus of the paper was on structural or institutionalized racism rather than on mere individual race hatred. The police killing of George Floyd was highlighted in this paper as a means of graphically representing racism in America. One man cried out, and the whole world listened. Because of the unprecedented media coverage of this event, the case represents something else as well—hope of systemic change in a world in which Black Lives Matter.