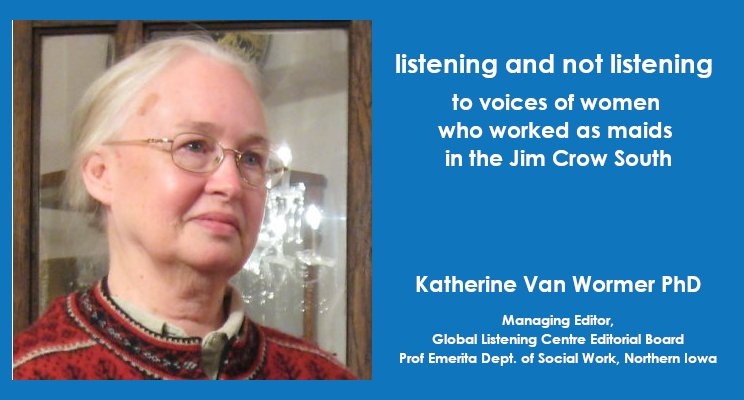 Abstract. This article discusses the art and science of listening. The focus is on listening, with an emphasis on the personal narrative which can take us into others’ lives, into their feeling memories, as they describe what they saw, heard, tasted, and smelled in another place, another time. The voices are those of storytellers who are older African American women who had worked in the homes of white families in Mississippi and Alabama and who shared their pasts in taped interviews with a passion, anger interspersed with humor.

To hear or read the stories of these older African American women who grew up sharecropping and working as servants in the Deep South is to come face to face with injustice and trauma, and the guilt that many of us southern whites bear. This paper briefly looks at the importance of listening in order to understand. It also discusses failure to listen as a common defense mechanism, well known in social psychology. Many do not want to hear, so they tune out. They do not ask the questions of those who were oppressed because they do not want to know. The final portion of this article presents an excerpt from the transcribed tapes of the women who wanted to record their memories for posterity. From the collection of interviews, the reader can get a glimpse at least of the hardship of the lives of the descendants of slaves forced like their ancestors to endure the systemic cruelties of a system designed to keep one race subordinate, uneducated, and subservient to the other race.