Listening in the Time of the COVID-19 Pandemic: Ignoring What We Listen to May Not Be Our Fault 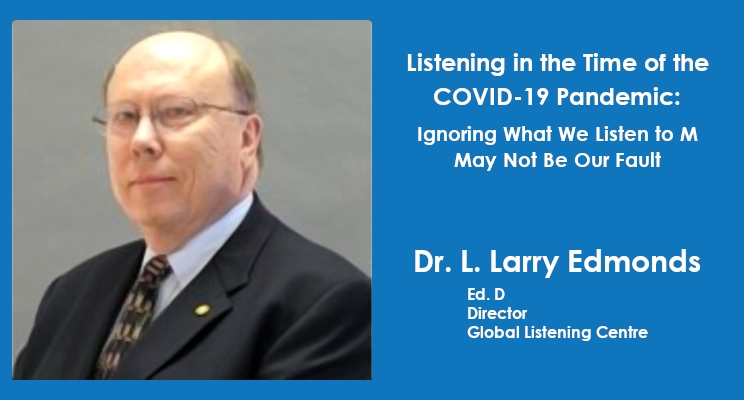 Listening in the Time of the COVID-19 Pandemic: Ignoring What We Listen to May Not Be Our Fault

Some scholars in the field of Communication have tended to largely focus on the production of utterances and the effective creation of informative and persuasive speeches, interpersonal, intercultural, business, and other types of communication, sometimes controlled by the sender of a message. Subsequently, these areas are often taught to the exclusion of listening as an integral part of shared meaning (the goal of Human Communication). Listening is an active process which requires spending energy to capture, sort, interpret, and retain the information that is sent to us. Hearing, on the other hand, can be a passive activity in which stimuli are around a person and little or no effort is needed to, not is focus applied, in an attempt to capture, sort, interpret, and retain that “noise.” Because a person can determine what is important to listen to and what is not, humans are known to apply selective listening to daily life, filtering out what they consider to be undesirable information that is filtered out of our memory much as a colander filters the water off a pot of pasta. Selective listening, however, may not always be the direct fault of the listener in the case of the COVIDF-19 pandemic.

Communication is a basic tool that humans use to share meanings between and among themselves. Samovar, Porter, and McDaniel (2010) note that “at the most basic level, language is merely a set of shared symbols or signs that a cooperative group of people has mutually agreed to use to create meaning” (p.225). Similarly, Galvin, Bylund, and Brommel (2012) suggest that communication is a symbolic activity and a transactional process through which humans create and share meaning. As a transactional function, both a receiver and a sender must be included in the interaction or no communication occurs. Symbols then, such as words or hand gestures, as in the case of American Sign Language, are used to make messages and to make meaning of those messages. Nonverbal messages tell humans a great deal about what meaning should or should not be made in an interaction, but words serve as the commonly used symbols in human communication (Galvin, et al., 2012).

Just as might have been the case with the Spanish flu 100 years ago, listening to experts can be an important source of safety measures to protect ourselves, our families, our neighbors, our friends, and total strangers from the deadly COVID-19 pandemic that is changing the lives of people around the globe. “Effective communication during the COVID-19 pandemic can save lives” (“Who Is Listening?”, 2020). At the present time, social and physical distancing measures are the lead strategy in combatting the spread of COVID-19. In the United States, however, varied messages seem to have created a more selective listening pattern regarding the pandemic. This situation may, however, be mitigated by the disparity between and among the various levels of income and the types of jobs held by individuals.

PR Newswire (2020) found that lower-income residents go out of their homes more than others and that urbanity and income play a larger role in going out behavior than does age, as we initially thought when the pandemic began. Also, city residents are more likely to stay at home than are rural residents. To be sure, lower-income residents are more likely to work in service industries that need to keep going in a pandemic to supply the needs of the overall population. Someone who works in a fast food operation generally must be on-site in order to meet those demands of the customers, even when service is takeaway or curbside only, increasing his or her risk of exposure to COVID-19, whether they listen to the warnings of government and/or medical professionals. Go to work or face the risk of losing that job. The desire to follow the advice of medical professionals and some political leaders and staying in the relative safety of the home may be offset by the need to work and the need to, in a way, return to the human history of being hunters and gatherers.

Similarly, those who live in more rural areas and who actually hunt for the meat and gather the berries, nuts, and other agrarian consumables with which they feed their families may be far more likely to leave the home to obtain those essential items. It might also be expected that these same issues probably exist in other global areas in which many of the citizens are lower-income and/or rural workers – two groups that show a higher incidence of venturing away from home around the world due largely to need for those essentials.

This research (PR Newswire, 2020) further found that low-income and predominantly high school educated individuals showed levels of going out 25% to 27% higher than the national average. This may be attributable to their lower incomes and the fact that they have no choice but to go out for their work and to get essentials. Here, again, listening or lack of listening may not be culprit as people need food, water, and other essentials for day-today living. Additionally, those who work in higher paying jobs may have the luxury of working from home. These higher paid employees also tend, according to PR Newswire (2020), to watch television (in the United States) on cable channels such as CNN and CNBC which provide guides to safer behaviors relative to avoiding infection from others who have contracted COVID-19 and those who do not necessarily practice effective distancing, face-masks, and other precautions.

Other factors may also influence the degree to which people listen to sage advice regarding their own safety. In a pilot, survey-based study, responses were received from 705 adults in Switzerland regarding their support and practice of social distancing measures (“Who Is Listening?”, 2020). The purpose of the data collection was to examine whether the collected responses were: (1) influenced by whether the measures were supported by an internationally recognized celebrity or a government official, (2) dependent on whether the spokesperson was liked, and (3) age-dependent (“Who Is Listening?”, 2020).

The Swiss study revealed that a government official was more effective, particularly in response to current compliance with social distancing measures and was substantially stronger among older respondents despite having lower risk perception. The summary of these findings is simply that being liked seems to boost this effect (“Who Is Listening?”, 2020).

“Additionally, respondents’ greater support and compliance was positively associated with (1) higher concern for the current situation, (2) higher concern for the well-being of others, (3) greater belief that others are practicing social distancing, (4) feeling greater constraint in freedom of movement, (5) city size, and (6) household size” (“Who Is Listening?”, 2020). Clearly, varied contexts can easily produce disparate results. “Since different parts of the population appear to have different perceptions of risk and crisis, our preliminary results suggest that different spokespersons may be needed for the younger and the older populations, and for rural and urban populations. The development of evidence-based knowledge is required to further identify who would be the most effective spokesperson, and in particular to groups with low risk perception and low compliance “(“Who Is Listening?”, 2020).

It is imperative here to think in terms of source credibility. Griffin (2009) suggests a look at source credibility theory and that trustworthiness and expertise are the two factors that lend credibility to the sender of a message. He encapsulates the notion of source credibility by treating it in this way: “Perceived competence and trustworthiness of a speaker or writer that affects how the message is received” (p.14). The question about selective listening seems, then, to be swayed by contextual considerations and not solely on the determination to consciously ignore what is being communicated. In the study of the Swiss, the communicator may well be judged by those to whom the messages are sent, and age and other factors may determine the probability of active or selective listening. It would be suggested, then, that the “experts” speaking on the COVID-19 pandemic and ways to stay as safe as possible should engage in dialogic communication, simply stated, dialogic communication is speaking in a manner that encourages others to listen and to listen in a way that makes others wish to speak (Pearce and Cronen, 2009).

While selective listening is a potential problem in the workforce, as in the case of the Challenger Space Shuttle disaster, or in the romantic relationship, when one partner suggests he or she is paying attention to the other when not actually doing so. Selective listening is often blamed for the lack of conveying a share meaning when a message is sent in many contexts. What has been found herein is that intentionally listening selectively may not be an “act-alone” issue when dealing with the warnings about the COVID-19 pandemic.

People from varied income levels and those from rural and those from urban setting may react differently to messages regarding the virus and protection from that virus. Also, people in some contexts may have the luxury to remain inside and work from home, while others may not. In particular, however, it must be noted that the meaning of a message may seem to vary due largely to the messenger and the audience members’ affinity for or disliking of that messenger. A positive message from a well-liked celebrity or government official seems to be received with greater acceptance than a message delivered by an official or celebrity who is not well-liked of highly respected. The resultant actions my put the listeners at risk of exposing themselves and others to the deadly virus by no heeding the message, even though to meaning is shared. The motivation to act can be tied to the messenger more than to the message itself.