Listening: The First Response to Racism 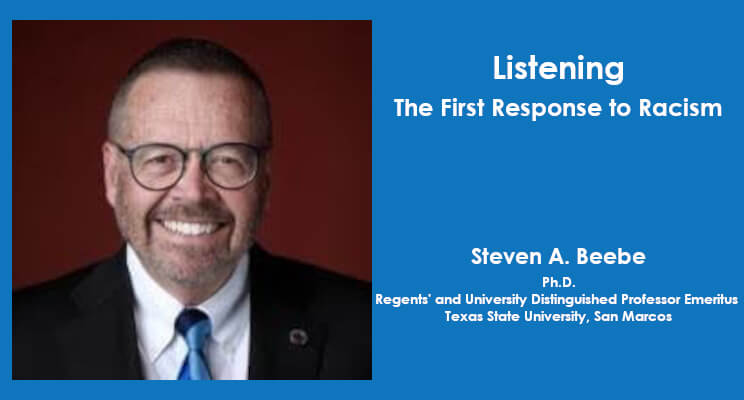 Listening: The First Response to Racism

Prejudice against a person’s race is not confined to one country or culture, nor is it a new phenomenon.  But this spring’s agonizing death of George Floyd, witnessed by the world via video, at the hands (and knees) of police, resulted in a world-wide firestorm of protest and violence.

New York Times columnist David Brooks, when asked during an interview how to solve racism, quickly responded: “The first thing we have to do is learn from each other and talk to each other.”  He then added, “May we make use of this moment of useful discomfort.”

How can discomfort be useful during this season of warranted rage?  Our discomfort, including justifiable anger, can be useful if it spurs positive action to address long-entrenched systems.   We need to address both systemic racism and micro aggressions—brief comments that reflect judgmental stereotypes based on race, ethnicity, gender, or group affiliation.
What should we do first?  Listen. In the midst of collective anger and violent protests, listening may not be a natural initial response to bridge differences and facilitate healing. But as we seek to understand the corrosive daily drip of racial prejudice, along with the dramatic violation of human rights, listening is a rational response. Perhaps too rational. The admonition to listen may seem a too simplistic, anemic response to such a wide-spread, vicious problem.  But it’s a start. Some suggest it is the place to start.  “The first thing we have to do is sit down and listen,” proposed Bob Kroll, president of the Police Officers Federation of the Minneapolis Police Department, in direct response to protests and riots resulting from George Floyd’s death.  U.S. Senator John Cornyn, when asked what should be done to address the long-entrenched problem of racism, had a similar response: “It’s critical now more than ever that we all take the time to listen.”

Although listening may be perceived as a too tepid response to a problem at the boiling point, effective listening is not an easy, glib, or shallow technique.  True listening, especially deep and compassionate listening, is not an inert, passive ritual, but requires focused, concentrated effort. That’s why theologian Henri Nouwen said, “To listen is very hard because it asks of us so much interior stability that we no longer need to prove ourselves by speeches, arguments, statements, or declarations.”[i]   Listening to the pain of others is uncomfortable.  But perhaps we can channel our discomfort to first listening to the stories of others, and then responding in positive ways.

I join with the Global Listening Centre in advocating for the power and importance of listening as an essential first step in the process of addressing racial injustice and righting the wrongs of systemic racial prejudice.

Racial injustice calls for action. Consider these actions as we listen to the pain and anguish of racial prejudice:

Be authentically present when listening to the uncomfortable.

Manage emotions.  Neuroscience researchers discovered that when you are listening to information that clashes with your ideas, is against what you believe to be true, or arouses deep-seated emotions, your brain reacts the same way as if you were being chased by a bear. Of the three typical responses to trauma—fight, flight, or freeze—fight is all too often the first, unedited response to heightened emotions. To manage emotions does not mean to respond vacuously. To listen through discomfort is to be mindfully aware of our emotions, especially when emotions flare. We should speak respectfully and listen thoughtfully.

Admit when you are wrong.  National Football League Commissioner Roger Goodell recently issued an apology regarding his previous position about race and player protests. “We, the National Football League, admit we were wrong,” said Goodell, “for notlistening to NFL players earlier and encourage all to speak out and peacefully protest.”  Be willing to admit past wrongs, acknowledge pain, and seek forgiveness for ineffective listening in the past.

Empathically care. The word care originated from the word kara, which means to lament, to mourn, to participate in suffering, to share in pain.[ii]  Listening is a way to demonstrate caring and sharing in the presence of the pain of racial bigotry.

Racial prejudice is not confined to any one time, place, or culture.  It is ancient and universal. The Duke Global Health Initiative acknowledged that “Racism is woven into the fabric of . . . life, both overtly and subtly; within its institutions and policies.”  In developing strategies to address racism, the first suggestion of the Duke Global Health Initiativeis to listen, to be able to “receive and believe the truth and hurt of People of Color when they relay incidents of racism and bigotry.” Racism is a knot in the thread of humanity.  Merely tugging harder on the knotted thread makes the knot intractable.

Listening is a first step in untying the knot of racial prejudice, but not the last.  Listening, which includes being present, managing emotions, admitting mistakes, and empathically caring,is the prelude to actions to address systemic racism. Many communities in the U.S. hold “listening sessions,” during which citizens, community leaders, and law enforcement personnel meet to share and listen, followed with meaningful action.  In structuring a listening session for the city of Long Beach, California, city officials used a four-step process worth emulating: (1) Acknowledge the existence and long-standing effects of systemic racism; (2) Listen to stories and experiences of racial injustice, inequity, or harm of community members; (3) Convene stakeholders to evaluate the feedback from the listening process and shape policy, revise budgets, and chart programmatic reform ideas; and (4) Catalyze action by developing and implementing immediate, short-term, medium-term and long-term action plans.  Just prior to hosting a listening session at the University of Nebraska Medical Center, Interim Director for Inclusion, Sheritta Strong echoed columnist David Brook’s observation:”We have to acknowledge that it’s OK to be uncomfortable.”  She added, “And we have to be comfortable being uncomfortable with the topics we are going to discuss.”[iii]

In the face of racism, bigotry, and hatred, may we first listen, and then demonstrate that listening has occurred by taking action to address intractable, systemic racism wherever it exists.   May we use discomfort to motivate us to be a first responder to racism: Listen.