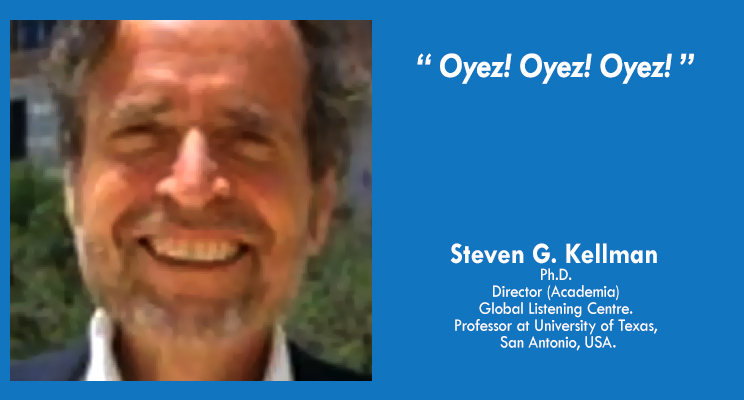 L istening is essential to success in many professions. A physician without a stethoscope is as handicapped as an encumbered without a microphone. Auscultation (from the Latin auscultare, to listen), the procedure of monitoring sounds within organs of the body, is a standard diagnostic tool in medicine. Film, theater, and orchestra directors assemble their performers by auditioning talented hopefuls. Furthermore, the procedure of inspecting ledgers for negligence or fraud is called an audit, because examiners used to require that financial information be read out loud to them while they listened for irregularities. “Oyez! Oyez! Oyez!” (from the Anglo-Norman ouïr, to hear), proclaimed at the start of each day’s legal proceedings, is designed to command the attention of all those present in court.

However, the hearing-impaired seem excluded from these models, unless we regard “to listen” synecdochically, to represent all ways of paying attention. After he became deaf, Ludwig von Beethoven was unable to hear the tumultuous applause that greeted the first performance of his Ninth Symphony. However, the sublime complexities of his final string quartets demonstrated that, despite his infirmity, the composer never flagged in his attention to detail.

A more sinister side to listening comes with the word’s sense of “obeying.” In a dictatorship, the leader dictates, and the submissive populace listens. Obedience might be a virtue in children, pets, and military recruits, but not in free, sentient adults. Yet the highest form of listening is not acquiescence. Attuned to perfect pitch, true listeners can discern the exquisite melodies beyond the clamor designed to subdue.

Although most of us who study literature possess healthy otic organs, we spend more time looking than listening. The invention of writing more than 5,000 years ago allowed the unstable, impermanent human voice to be supplanted by squiggles imprinted on stone, papyrus, parchment, and paper. The conclusion to William Shakespeare’s Sonnet 18 proclaims the enduring power of the written words that constitute that very poem: “So long as men can breathe or eyes can see, So long lives this, and this gives life to thee.” The poet could not make that claim about a fleeting utterance that is merely heard. Seeing is sustaining. Speech is not nearly as enduring as a pattern of letters on the page.

Of course, in analphabetic cultures, the study of literature is a matter of listening to oral performances. In modern

developed societies, live theater, poetry slams, and audiobooks also appeal to the ear more than the eye. However, designed to be encountered on a printed page in a silent room, much lyric poetry demands that we hear its sound patterns only in the mind’s ear. For the most part, sight is more useful than sound to scholars of literature. But each is a synecdoche for – an example of – the activity of paying attention. For all their differences, listening and looking are similar in that both are active and purposeful; hearing and seeing are, by contrast, passive and haphazard. One has to make a deliberate, conative effort to notice, whether it is through listening or looking. Without such an effort, the undifferentiated world remains leaden and inert.

Gertrude Stein’s oft-quoted declaration that: “Rose is a rose is a rose is a rose” is memorable poetry but faulty horticulture. Every petal, like every snowflake, is unique. While campaigning for the governorship of California, a state that prides itself on its magnificent redwoods, Ronald Reagan asked: “I mean, if you’ve looked at a hundred thousand acres or so of trees – you know, a tree is a tree, how many more do you need to look at?” Can the refusal to look at individual trees portend a tendency to regard individual human beings, too, as replaceable, even disposable? Anthropogenic mass extinctions are the product of human failures to listen to the natural world.

At a certain level of abstraction, all works of literature are the same. All are variations on love and death. It is the details that count, that distinguish Madame Bovary from The Tale of Genii and The Death of Ivan Ilyich from King Lear. I urge my students to look closely at elements of style, structure, setting, characterization, and plot, to notice what makes each text precisely what it is and not something else. Successful literary scholars are re-readers. They are continually finding something new in old texts, because, never satisfied with a single glance, they keep looking. The study of literature teaches us the importance of gazing carefully at details of the worlds we inhabit. Not to do so is to reduce those worlds to a dull, undifferentiated mass. As Socrates, who mistrusted written texts, famously – and tautologically – put it: “The unexamined life is not worth living.” That is advice worth listening to .

Steven G. Kellman, Ph.D., is a professor of comparative literature at the University of Texas at San Antonio. His books include Ram-bling Prose: Essays (Trinity), Nimble Tongues: Studies in Literary Translingualism (Purdue), and Redemption: The Life of Henry Roth (W.W. Norton).