Huub Stapel a dutch actor is having his second show on stage about the differences between men and woman, M-V2. It is a very successful show in the Netherlands. According to Huub, the most important advise for a good relationship is to listen to each other.

While much has been said about women and men being from different planets and having their own cultures, the reality is that we have all grown up on the planet earth, and interact with each other every day. And although there are really strong differences I need to say that we have to be careful to not stereotype and assume that all men will act a certain way and all women will act a certain way. There are women that have some traits that might be attributed to the male style or the other way around.

Okay so we know they see the world through completely different perspectives. But what about listening? Can man listen better than woman?

He is conditioned to listen actively. When a woman initiates conversation he assumes she is seeking for advice or assistance. He engages with the woman, filtering everything she’s saying through the lens of, “What can we do about this?” Learning to listen patiently doesn’t come easily to him.

Men better than women are often able to stay focused on one speaker and ignore others in the environment. 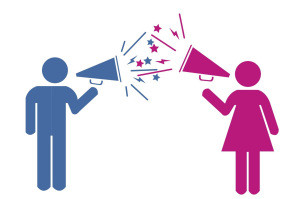 On the other hand, women far more often then men tend to check their environment for other important messages.

She sees conversation as a productive end in and of itself. If she feels sufficiently heard she may not need to take further action to resolve a problem or “make things better.” The fact that she has been listened to assuages her anxieties and dulls the pangs of negative feelings. Sharing with someone who understands and loves her heals her from the inside and equips her with the emotional tools necessary to handle the trials of the outside world.

Women tend to understand the emotional parts of messages more effectively than men. This is probably because research indicates that women process messages on both sides of the brain more so than men. Men tend to process more on the left side of the brain and emotional information is processed on the right side.

According to Larry Barker and Kittie Watson, authors of the book “Listen Up,” men and women typically employ different listening styles. Men are more likely to be action-oriented listeners, which means they focus on listening to information pertinent to the task at hand. Action-oriented listeners have little patience for speakers who ramble off topic or include unnecessary details. Women are more likely to be people-oriented listeners. They connect with the emotional message and undertones of a conversation and are more concerned with the occurrence of the conversation than with the pertinent information discussed.

Men and women in listening roles during conversations tend to express their responsiveness in different ways. Women often interject with small acknowledging remarks such as “yes,” “I see” and “mm-hmm” to show the speaker that they are actively listening and processing the contents of the conversation. Men tend to listen silently, interjecting sparsely and usually only to ask clarification. The difference in response style can cause women to assume that men aren’t actively listening to them in conversations, while men tend to think that women “overlisten.”

Well despite all the research about gender differences in listening, little to no evidence suggests that members of one gender are better listeners than members of the other. Men and women can listen equally well. Listening ability appears to be more due to individual differences and circumstances than due to gender.

Regardless of why men and women don’t listen the same way, it is important to know what to do to have a better understanding. Remember that these are general guidelines and that each individual is different.

Director & Chair (Health), GLC. She is a member of the Advisory Board of the Foundation Ikone and ambassador Changeday Netherlands