The Importance of Listening in an Argument Culture 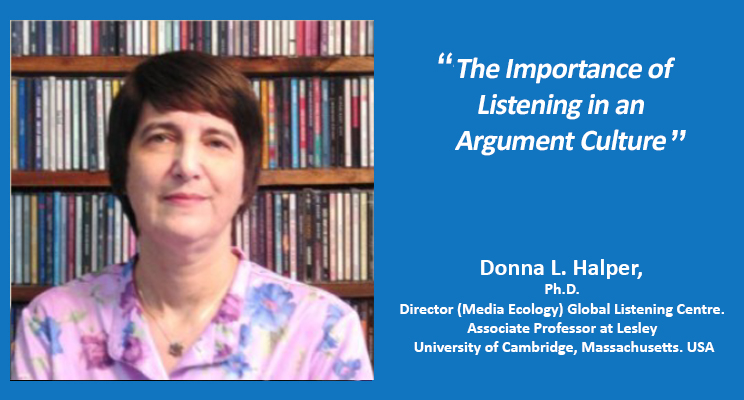 The Importance of Listening in an Argument Culture

For many of us, our typical day is punctuated by frequent interactions with the internet and social media. We check our email, we read our newsfeed, we look at our phones to see if anyone has messaged us, we view a friend’s Instagram photo, or we find something clever on TikTok. Perhaps we go over to Twitter to see what the latest political debates are, or maybe we watch a YouTube video about some current issue. Some of us are members of a Facebook group which revolves around discussing our favorite television program or sports team or rock band. In other words, it’s difficult to avoid online communication.

The good news about social media is that the various platforms provide an easy way for people from all over the world to engage with each other. In many cases, the interactions are friendly and courteous: for example, I’m a baseball fan, and when there is voting for the All-Star team, I might go to Twitter to exchange opinions with other fans about which players should get chosen. Or when it’s the anniversary of an important historical event, people might go to Facebook to share their reactions (and if it’s a recent event, they might even share recollections and photos). Under those circumstances, social media can be like a virtual family reunion, with people who might never have met in real life able to gather online to talk about their common interests.

The bad news, however, is that increasingly, those moments of camaraderie and enjoyment are being replaced by arguments. I am not referring to online debates, in which both sides express their views respectfully. In a debate, participants listen, and they think about what was said. Sometimes, they may acknowledge that the other side has made a good point; at other times, they may decide to agree to disagree. And while debates can get heated, they seldom create animosity. In fact, the participants might even decide to revisit the topic at some future time.

That is very different from what happens in an online argument, in which one side quickly loses patience and begins mocking or insulting the other. No listening occurs in this scenario, since each side is convinced that they are right and the other side is contemptible. I see this type of interaction frequently on Twitter and Facebook, especially when the topic is politics. A simple opinion (“The president is doing a good job handling this problem,” or “The prime minister’s policy seems very sensible to me”) quickly turns into exchanges of insults, as commenters not only attack the she would win me over, but rather, because I wanted to learn more about her point of view. By listening to her, rather than trying to “defeat” her or point out her flaws, there was space for us to talk in a way that was not adversarial. She shared her beliefs, I shared mine, but we did so respectfully in the end, since neither of us was “the enemy,” she learned something about me, and I learned something about her. We are still commu- nicating, even if there are some areas where I doubt we will ever agree. But why must “winning the argument” be the goal? She and I have already found a few areas of common ground, and to me, that is time well spent.

I’m not going to lie to you. Listening is not always easy to accomplish. There are times when I hear what the other person is saying, but I’ve already decided they’re wrong, and that’s that. At such times, I know I’m not president or prime minister but attack the person who dared to make such a ridiculous remark in the first place. And since this type of interaction involves various folks insulting each other, it not only ends with no hearts and minds being changed, but also with feelings of frustration and anger.

Communication scholar Deborah Tannen has researched this phenomenon for several decades. She theorizes that we are living in an “argument culture,” where even the simplest interaction can quickly escalate into verbal combat, as each side tries to win and defeat their enemy. We can certainly see this attitude on radio and TV: for example, when I was growing up, talk shows used to be informative. They featured a host, talking with several guests who were experts in their fields, and they provided an opportunity to hear various perspectives on the topics being discussed. But these days, that style can mainly be found on educational channels. Everywhere else, these programs have morphed into outrage and fury, with commentators and guests who try to annihilate any points the other side might offer. This kind of program has become very popular — whether on radio or TV or on a podcast, audiences seem to find it entertaining for people with diametrically opposing views to engage in an intense verbal duel. But as Shakespeare’s Macbeth might have said, these programs are often “full of sound and fury, signifying nothing.” By framing every conversation as a potential argument, and by defining anyone who disagrees as an adversary, we end up with what professor and historian Walter Ong referred to as “agonism.” Drawn from the Latin word “agon,” meaning “war,” agonism is a kind of communication where everything becomes a battle, where you know right away that the other side is wrong and so, of course, you are well within your rights to attack what the other person has said.

I think both Tannen and Ong are correct in their assessments. I see ample evidence that many people, especially on social media, are focused on crafting a rude or sarcastic comment that will make the other side look foolish, or trying to win, rather than trying to listen. In an argument culture, the goal is to be right, no matter the cost. And believe me, there is a cost. All this arguing diminishes the significance of people who might have something to teach us; it allows us to dismiss them without even getting to know them—we know they’re wrong, so why bother talking to them?

And that’s why we all need to revisit the importance of listening. I was having a discussion with someone on social media several days ago, and it quickly became obvious that she and I don’t agree on politics. At that point, it would have been easy for me to end the discussion, but I didn’t do that. I took the opportunity to listen to what she was saying—not because I thought really listening. I also know, being human, that there will be times when I’d rather be dismissive, or make a snide remark. But I try not to do that. It’s better for me to make the effort to listen—even when I’m talking with someone whose views are very different from mine. Of course, if someone is rude and seems to have no interest in an exchange of ideas, I can always end the conversation. But more often than not, I find that when I give the other person a chance to engage in a discussion, it can be a valuable experience. And even when our culture seems to encourage us to argue, we don’t have to give in to it. We really can give the other person a chance to relate to us. And it all starts by being willing to listen, rather than immediately creating an argument.